Editor's note: This educational guide is brought to you by Premo Guard Bed Bug Spray.  Please see below or click here for a special discounted offer.

Introduction: how to use this bed bug guide

Belonging to the order hemiptera or true bugs, bed bugs are household vampires that feast on blood. They undergo a slow metamorphosis through a 5-stage life cycle that begins as an egg hatching into a nymph to end as a mature breeding adult with a nasty bite.

In this guide, we’ll walk you through what a bed bug is, how to spot them, and their life cycle.

A QUICK VIEW OF CHARACTERISTICS

The common bed bugs are interested in humans and don’t go for animals with fur. They can cover a lot of distance and travel about in personal belongings such as purses, luggage or gym bags. Bed bugs hate heat, so they won’t travel directly on your body, so protecting your belongings is the best way to prevent infestation. 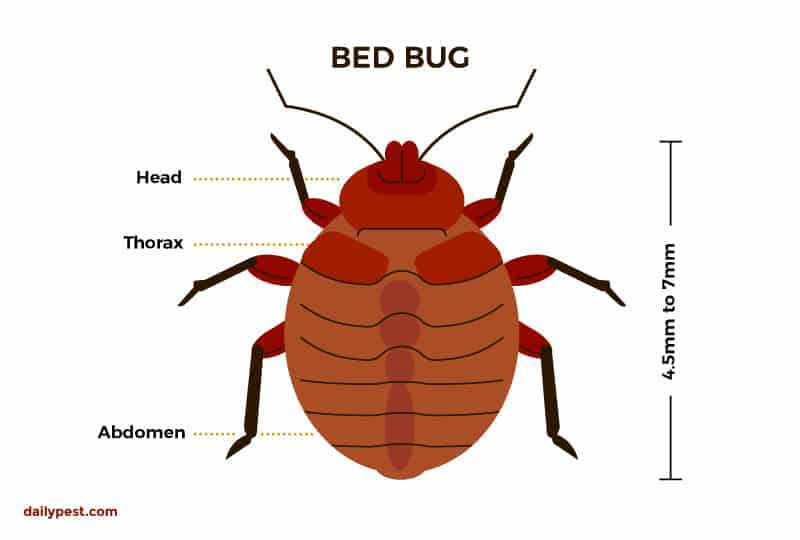 Have you seen apple seeds? Adult bed bugs look quite similar. Depending on their age, they are between 4.5mm and 7mm long and go from white when first hatched to a deep mahogany brown. A closer inspection reveals six legs, an oval-shaped abdomen and two short antennae.

Being an insect their anatomy is divided into three parts, head, thorax and abdomen.

Head: Bed bugs have a tiny head and an eye on each side for 180 degree vision. For a nose they have a sharp ‘beak’, the clypeus, used to pierce skin. You may not notice it’s long proboscis since bed bugs keep it tucked under their bodies unless they are feeding. There are also two antennae.

Thorax: The midsection of a bed bug is called the thorax. Compared to other insect thoaxes, it’s quite tiny. Nearby there are rudimentary ‘wing casings’. There are no wings.

Abdomen: The abdomen of a bedbug is its most noticeable body part. In fact, it’s usually twice as wide as the thorax and around four times as long. From above, it looks quite rounded, but from the side, it looks flat.Unlike many other similar-looking bugs, their bodies look quite segmented when you view them from above, and that separates them from carpet beetles and spider beetles. Their oval-shaped bodies also help identify them.

They are wingless, which means they just cannot fly. Many people say that bed bugs can fly because they have wing pads. That’s not true because they do have the vestiges of wings but they are not developed enough to help them fly.

So, how do they move?

Well, they crawl, and more interestingly, they are capable of covering up to 4 feet in a minute.

It may not seem far, but it’s usually enough for them to find a hideout when you try to kill them. 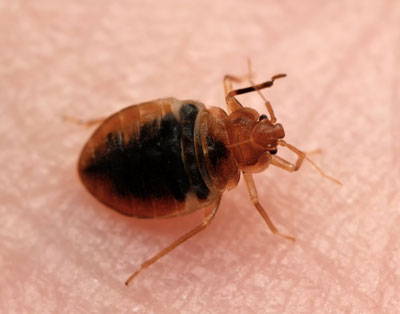 In their lifetime, bed bugs go through three stages including molting twice as an adult.

Egg: Eggs are tiny and pearl white in color. They are laid in dark spots around your home. They take about 6 to 9 days to hatch.

Nymph: During the second stage, nymphs or juvenile bed bugs hatch and are around 1.4mm long although some can be up to 4mm. Each nymph passes through five stages, known as instars to become an adult, and it takes about 5-8 days to complete each instar. Nymphs look like adults but they cannot breed.

Adult: Once hatched, a bedbug takes around 35-40 days to mature. They can be as large as 7mm and at this stage are capable of reproduction. Under ideal circumstances, adults can live up to 10 months, but their lifespan is usually between 3 and 10 months. 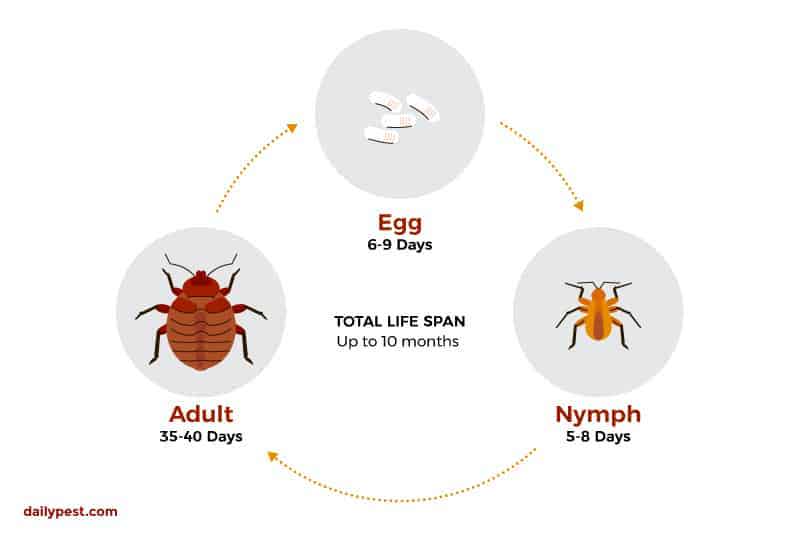 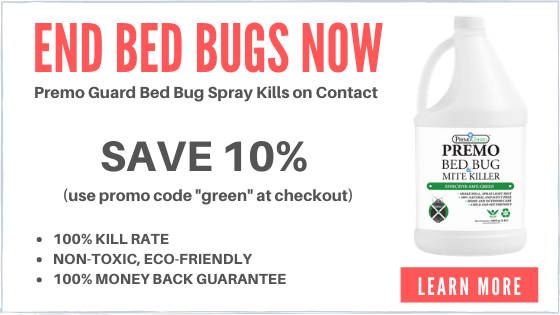 When you talk about getting rid of a bed bug infestation, it’s important to try methods that clear the adults and eggs, as well as all the nymphs.

Being white, nymphs are harder to spot but they only stay white until they take their first feed. Nymphs have a red lump in their abdomen where they store their blood meal as they slowly digest it. Once it’s completely digested they molt and shed their exoskeleton so they can grow larger.

As they continue to digest and grow they turn brown. The color change shows they have absorbed the nutrients in the blood. In total, the nymph passes through five sub-stages or instars and with the completion of each, they get browner. Once an adult, they don’t change color again.

Nymphs molt during instars and will molt five times altogether before they are mature adults. Between each molt, they need a blood meal to survive. Even though nymphs are small and too young to breed, they are still looking for a meal from the instant they hatch.

Fact: Did you know that after feeding, those nymphs could

grow up to six times their body weight?

CAN YOU SEE BED BUGS WITH THE NAKED EYE?

Of course, which is helpful if you’re on a mission to confirm you have a bedbug infestation. The adult bedbugs are the largest and darkest especially when they have recently fed. They also move much more slowly after they’ve just eaten.

Nymphs are tiny but still visible despite being no larger than a pinhead although you might have trouble finding them without a torch.

Bed bugs are nocturnal so active at night, but that doesn’t mean they won’t come out during the daytime to feed if there’s an opportunity. Even so, they prefer to hide in safe crevices and cracks during the day. This makes finding their hideouts more of an issue rather than being able to see them with the naked eye. 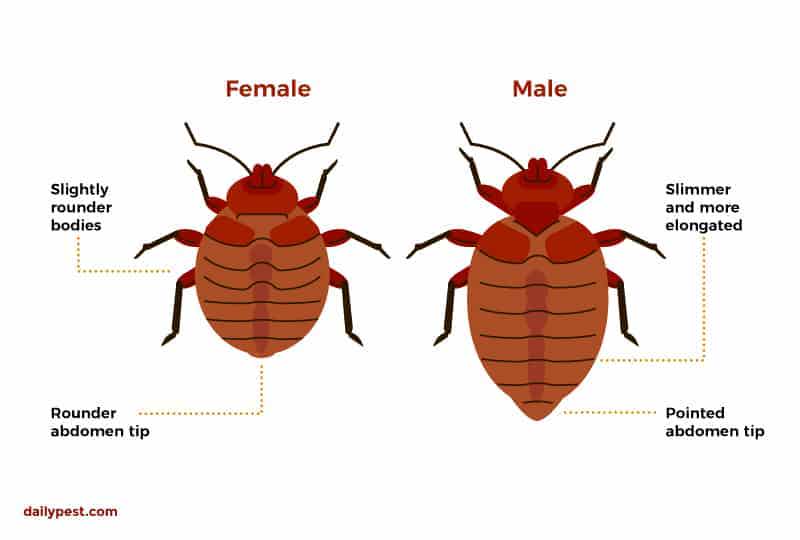 DIFFERENCES BETWEEN MALES AND FEMALES

It’s a subtle difference but still noticeable. To determine a bed bug’s gender, you need a close look at their abdomen. Ones that look slightly rounder are female bed bugs. Males are slimmer and more elongated, especially when unfed.A more obvious difference is at the tip of the abdomen.

A closer look will show that females have rounder bodies whereas males have a more pointed tip, which is considered their sex organ.

Fact: Did you know bed bugs bite a lot but you don’t feel it because they inject an anesthetic and anticoagulant while sucking blood but that may leave you with reddened bumps? 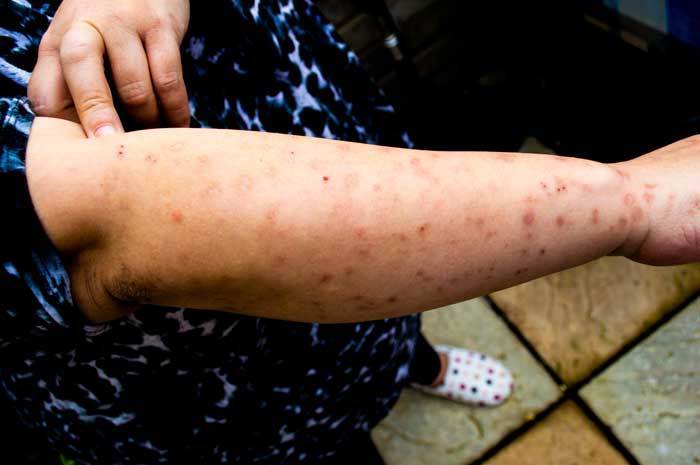 Dealing with a bedbug infestation is difficult not only because these pests have become resistant to common pesticides but because they reproduce very quickly. If it was possible to find a way to stop them reproducing, we’d be able to get rid of them once and for all.

Once a nymph passes through five stages and turns into an adult, it’s ready to breed. Bed bugs use a process called traumatic insemination. A male bed bug has to break through the shell of a female to inject sperm directly into its body. After traveling through the female’s body, the sperm eventually reaches eggs to fertilize them.

Something that makes this whole process bad news for households is that once fertilized, the female is capable of lying at least one egg a day, and she can mate again to keep topping up the number of eggs she is carrying. This process continues for 6-8 weeks, which means plenty of eggs to grow into new bed bugs.

Each female bed bug lays up to 200-250 eggs although some studies have recorded females lying more than 500. It all comes down to the right conditions. Females are likely to lay more eggs in warmer temperatures and in places where breeding and feeding conditions are most suitable.

Compared to cimex lectularius, the common bed bug in the U.S., lays many more eggs than their tropical cousins. A tropical bed bug lays no more than 50 eggs in her entire lifetime.

Fact: Did you know female bed bugs often migrate away from their harborages after the undergo traumatic insemination? 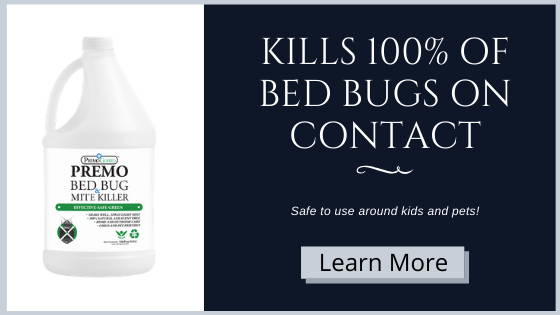 CAN BED BUGS SURVIVE WITHOUT A BLOOD MEAL?

One reason why we have failed to get rid of bedbugs for good is that they are very resilient and more than capable of managing without meal. However, once they have fed, it takes them a long time to digest the blood. Left unfed, they can last months without blood meal.

Bed bugs can live longer without food when they are in cooler environments. In fact, experts believe that bed bugs can live up to a year without feeding at 55F or less. However, they may find it a bit harder to survive without food in temperature-controlled buildings but they can still survive for 6 months.

This means that even leaving your home for a few months is not always going to work. These little blood-suckers won’t starve to death waiting for you to return.

Bed bugs are notorious household pests, and as they reproduce quickly, with each female laying over 200 eggs, it doesn’t take long before you have a heavy infestation at hand. Leaving it unattended would result in serious issues, including itching and allergic reaction.

Identifying those bugs, however, will help take quick actions and may make it possible to eradicate an infestation before the problem spirals out of control.

Editors note: This article, "Bed Bugs: Everything You Need to Know" first appeared on the website, DailyPest.com. Article reprinted here with their permission.